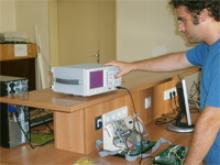 The Control Systems Laboratory sessions comprise of four different experiment sets which cover the basic topics discussed in the lectures. These four experiment sets are prepared for the demonstration of the very basic measurement and feedback control concepts studied through the EE450 course. The DC motor set-up can also be used for creating other experiments with different control algorithms

other than the ones listed below. A design project can also be assigned using available using the available experimental set-up.The first set of experiments deal with the input transducers and actuators such as slotted opto transducer, strain gauge, I.C.  based temperature transducers which are the essential building blocks of the control of a number of physical systems.

The second set of experiments is an extension of the first set and deals with output transducers such as a DC solenoid, a permanent magnet DC motor.
In the third and fourth sets, a permanent magnet DC motor is used to introduce servo feedback control. First an analog experimental set up is used and the general characteristics of the DC motor are studied. The influence of the feedback gain and velocity feedback is shown on the position control of the DC motor.

Then a digital control set up which includes an interface (with A/D and D/A converters) with a PC is used. First, position control and speed control experiments are repeated with control algorithms driven by the PC and position and velocity measurements supplied by a digital encoder. Following these experiments, the Proportional, Derivative and Integral (PID) control concepts are introduced and tested for position control using the digital control set up.